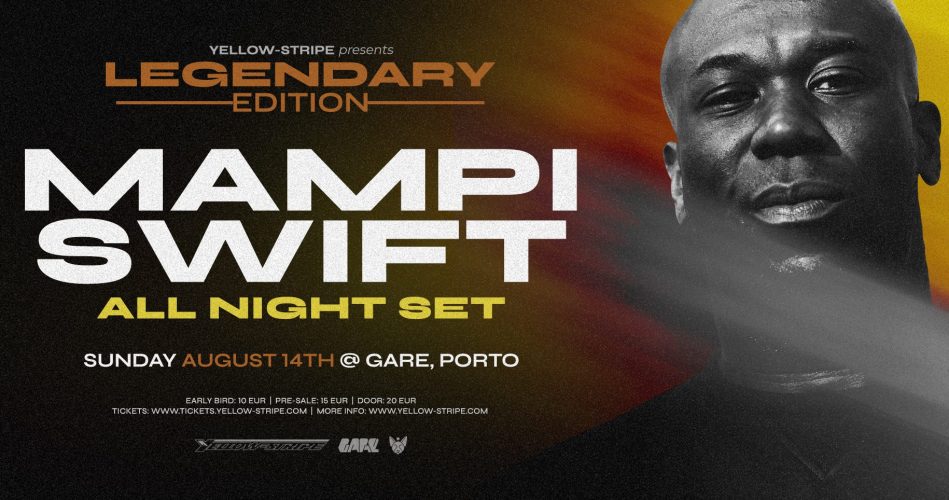 ✞ Yellow-Stripe presents LEGENDARY EDITION @ Gare Porto ✞
MAMPI SWIFT ( All Night Set)
Domingo 14 de Agosto ( Véspera de Feriado) // Sunday 14th August
Yellow Stripe has been working for a long time on another Legendary ‘project’ – as the idea matured over time we decided to make something brand new and in many ways a groundbreaking challenge for Drum & Bass events.
At Legendary Editions we will keep the theme of previous guests like DJ Hype, Roni Size or Dieselboy, which means artists with enduring legacies and fierce DJing skills – but now we extend the format to special ALL NIGHT SETS. Artists that fit this bill are invited to tell us their story and show us their vision of Drum & Bass through their historic sounds.
This is the RAVE of culture, knowledge and celebration dedicated to the genre, one that has all the elements that make sense in this kind of fresh and revolutionary sessions we have programmed to make you dance all night, that will feel unique and more exclusive than any of our other events.
MAMPI SWIFT [UK]
There is plenty to be said about the first guest of this brand new ALL NIGHT series of events…
One might think of Mampi Swift as the King of Double Drops, because he has surely earned that title over the years… but there is a lot more to this artist than that, starting decades ago when the 12″ format reigned over all others. Tracks like ‘Gangsters’, ‘Soldiers’, or ‘Play Me’ with the one and only DJ Fresh are just a few of the career highlight tracks that have been played by many artists and fans of D&B over the past 17, 18…19 years?! Back in the days ‘Zion’ was even immortalized in remix form by our dear Sygo from YS family members Hallucinator as S.M.O.K.E! Just a brief note on what is otherwise an extensive legacy of anthems that have been played and listened to all over and by just about anyone who is dedicated to the craft of Drum & Bass.
Apart from these important aspects of this legend’s career, Mampi’s CHARGE Recordings has been in the game for over 25 years, with more than 100 releases in catalog, and way too many hits and crowd favorites to mention. Beyond this impressive feat, world renowned artists like Sigma, the aforementioned DJ Fresh or even Friction released some of their earliest works on this label! A definite and important part of D&B history.
Well respected in the realm of the genre’s finest artists, Mampi Swift has been honored as something of much more value than a yearly Best DJ, Producer or Newcomer award – back in 2015 he rightly secured his place in the Drum&BassArena Hall Of Fame.
“There’s a certain league of D&B DJ that’s beyond premiership. End bosses. Grand wizards. Foundation layers. Professors. The men who were there at the very beginning as drum & bass started to find its sound, its message, voice and place in the chaotic electronic spectrum.
Randall, Grooverider, Fabio, Goldie, Hype, Bukem, Andy C, Roni, Bryan Gee, SS, Nicky Blackmarket… Mampi Swift. Men usually first in the queue for dubs, they worked tracks to become the mythical benchmarks they have since become. All armed with labels and productions of their own, they set the framework.
All men in that list have created legacies and continued to innovate and plough fresh ideas and talent back into D&B 25 years later. But only a few have done so consistently year on year. Everyone in the creative long game will experience a trip or two into the wilderness over the years. Especially if you began your career as a teenager and you’ve been on the global DJ merry-go-round ever since.
Such is the case with Mampi Swift. As a producer he set benchmarks with brutal cuts such as The One.”
UKF ( Dave Jenkins, 2016)
What more can we say?
We will be witnessing an intense set on 4 decks, as usual… and of course you can expect those insane double and triple drops, but the icing on the cake is that Mampi will be in the DJ booth for many hours playing a special set with tunes all the way from the early years up to today’s utmost bangers – spanning 1992 – 2022 – join us to be a part of a legendary event at the hands of one of the most important and relevant Drum & Bass artists since the beginning of the genre.
SUNDAY 14th August @ Gare
MAMPI SWIFT Feat Mc BRUNO
All Night Set
Tickets : http://tickets.yellow-stripe.com/…/legendary-allnight…
Early Bird : 10 EUR ( Limited Edition )
Pre-Sale : 15 EUR
At Door : 20 EUR